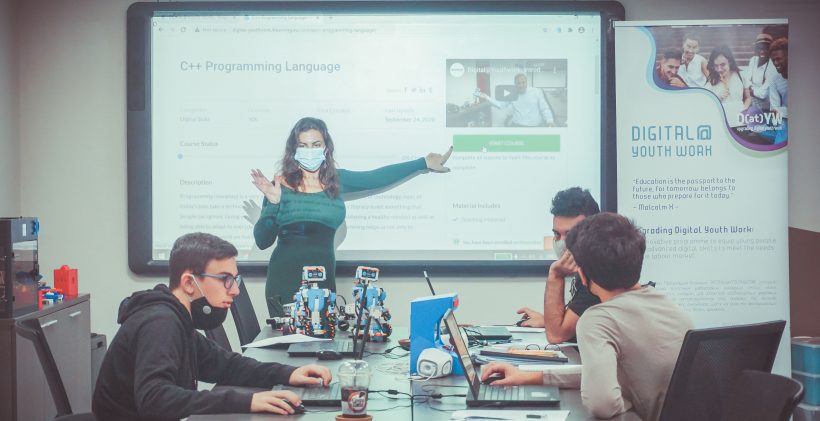 Between the 3rd of November – 27th of November 2020, Emphasys Centre conducted the Pilot testing for the Digital@YouthWork project for the C++ module (which was the module developed).

The sessions were organised face-to-face at the premises of Emphasys Centre in Nicosia, Cyprus. Due to the Covid-19 restrictions, the group of interested participants was split into two groups and each group participated in 3 sessions for the C++ programming module. The total number of participants in the groups was 15. 12 Young people participated and 3 Youth Workers. The sessions for the C++ material were led by Emphasys’ IT expert Nicholas Moudouros and the platform registration/navigation by Andrianna Georgiou.

Through Emphasys Network and Social Media Youth Workers were informed to contact potential young people who would be interested in learning some basics of programming and in particular C++ programming.

Each session began with an introduction to programming and its potential to job opportunities in the current market. We believed that this would be the best way to encourage the youth of today and make it as engaging as possible. Then the introduction to the project platform was conducted were all participants created an account, logged in and navigated the platform to see the e-community, e-databank, and finally the e-academy where they registered to the course. A pre-assessment was conducted, from the platform, to test the initial knowledge of the participants before the material was delivered.

The material that was taught included C++ fundamentals – meaning the structure of a programme, the codeblocks environment, variables and data types, constants and operators. Following this, were basic commands and structures which included basic input and output commands and control structures. The next part that was explained were data structures arrays. This included fundamental of arrays and multidimensional arrays.

For homework, our IT expert (Nicholas Moudouros) asked the participants to go through the final chapter – Functions. This included fundamentals of functions, calling pre-defined functions, and declaring and overload of functions. After the completion of this, they would be able to complete the final assessment and obtain the C++ certificate.

Finally, an evaluation form was handed out to ask for their opinion and an open discussion was led for anyone who wanted to ask regarding the program in general.

During the Open discussion, some students expressed that they liked the idea of developing more than just basic computer skills and the fact that it is available freely is very encouraging, especially during these more difficult times. Most comments suggested that the platform looked great and very easy to use, others liked the visuals of the certificate. Others would have liked to include other programming languages such as Java and Python. One returning student said she had registered for the Graphic design course and would have preferred more challenging questions for that topic.