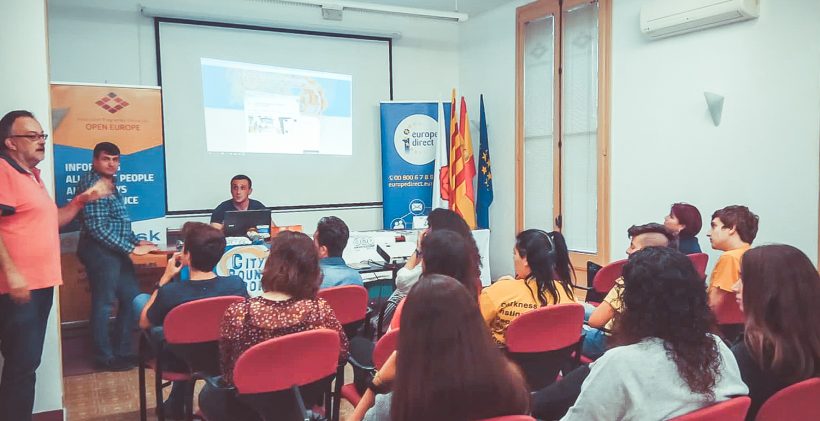 The focus group conducted in Spain took place in November, 2019. After organising an informative session and two focus groups, OpenEurope collected participants’ feedback, and elaborated a summary of the conclusion reached by the facilitators, young people and youth workers.

The methodology followed by the partnership was based on research, national reports, data collection via surveys and the feedback of the focus groups.

Why a focus group?

OpenEurope works on a daily basis with young people, both in local activities and in international activities (such as youth exchanges, youth workers exchanges…). However, in few occasions they have gathered focus groups that were formed by a mix of young people and youth workers willing to work together and as equals towards a same aim. In order to collect qualitative information about digital skills in the framework of youth –young people, youth workers and employers–, a focus group was a very appropriate approach as they put in common their own perspectives, ideas and experiences in the sector.

There was a first informative session organised with all the people that expressed their interest in the topic in OpenEurope’s premises (Raval Sant Pere, núm. 1, entresol, Reus). Participants were contacted via email, Facebook and face-to-face in our regular activities –i.e. weekly informative point in the Youth Centre of “La Palma” in Reus, or the “Volunteer point” in Cambrils.

In this session, OpenEurope presented the results of the survey conducted and the conclusions of the national report. The materials were in Catalan, Spanish and English, but the discussions and presentations were in Catalan and Spanish. It was an open session where the audience could express their opinions on the topic.

There attended mainly young people but there were also some experts on programming and social media marketing. At the end of this session, two focus groups were established: one with 11 participants, who were youth workers and young people plus two facilitators, and the other with 4 young people and one facilitator.

The two facilitators of this group were members of OpenEurope, indirectly involved in the D@YW project, and the participants were youth leaders of our national groups sent abroad to Eramus+ KA1 projects and a youth worker who collaborates with us from the Youth Department of the Town Hall. In this session there were three activities carried out:

Participants were paired up and they brain-stormed about the concept of digital skills and youth work. On the white board, facilitators wrote down in Catalan: “What is Youth Work” in your opinion?”; “Are young people part of the youth work sector?; “What are digital skills and what are they useful for?”; “Can you list three digital skills you think you lack”?. After ten minutes of pair-discussion, the entire group put the ideas in common and wrote down the main ideas where they all agreed on.

All participants were required to list down in a piece of paper the profile jobs they believed would have more job opportunities in the next five years in Spain and in Norway. Then, they put their answers in common and justified why they had written different jobs for the two countries –taking into account that the example of Norway was chosen because they do not know much about it. Then, the facilitators showed the results from the jobs profiles of the other partners of the consortium and encouraged another debate about the differences between countries and the changes of job profiles in the upcoming years due to digitalisation and technological changes.

SWAT analysis: the facilitators draw on the white board the SWAT analysis chart and the participants started to brainstorm to fill it in under the question “Youth work in Reus from the point of view of digital skills”. Then, in groups of three, from the ideas written down, they had to make two proposals of activities that could be organised at a local level in this sector. They had to draft a proposal including objectives, activities and timeline.

The second focus group was formed by 4 young people who had participated in one of the Youth Exhanges OpenEurope organised.

The first activity was also a brainstorm about the concept of digital skills and youth work. The questions were the same ones as in the other focus group (“What is Youth Work” in your opinion?”; “Are young people part of the youth work sector?; “What are digital skills and what are they useful for?”; etc.). Then, the facilitator moderated the discussion.

Participants were provided with flyers and brochures with different training offers and activities of the region. They had to analyse them with special attention to training offer for the youth in terms of digital skills. After that, they also had a short discussion about what they thought was lacking and how it could be improved.

As in the first focus group, participants were required to list down in a piece of paper the profile jobs they believed would have more job opportunities in the next five years in Spain and in Norway. Then, they put their answers in common and justified why they had written different jobs for the two countries –taking into account that the example of Norway was chosen because they do not know much about it. The facilitator and the participants compared the results from the jobs profiles of the other partners of the consortium and had a short debate about findings.

The two focus groups were organised successfully. All participants provided very positive feedback on the activities that the facilitators organised and about the topics dealt with.

The main conclusions were that in general, young people were not very aware of the implications of ‘youth work’ and they associated it with ‘social work’ or working with people with special needs and difficult backgrounds. Also, young people are not aware enough of the concept of youth work and about how it can have a very important role in the education and training aspect of a society. Digital skills and competences are something that young people have at a very superficial level, and which does not match with the needs of the jobs profiled.

In the SWAT analysis, the ideas by young people and those of youth workers were very different, especially when it comes to new ideas and initiatives to solve the problems identified. Youth workers emphasised the lack of funding and efforts on behalf of the public administration, while young people were providing new ideas of activities and initiatives that could be organised at a local level to tackle the lack of digital skills

All in all, the focus group were very useful for both the participants and for OpenEurope to have a better understanding of the situation in this field in their local and most close context.