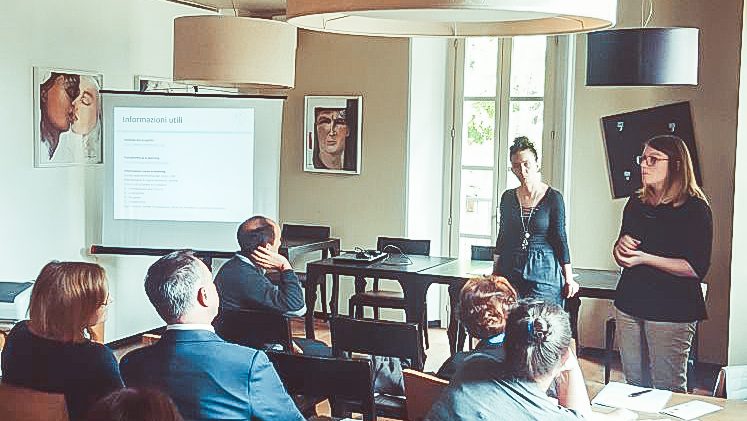 In November 2019, a focus group was conducted in Milan, Italy, with the goals of understanding the opinions, beliefs of the participants and investigate their knowledge of the subject of digital skills and competencies. The aim of the focus group activity was to collect additional qualitative data on the theme ‘digital skills and competencies applied to youth work, young people and employers’ in order to complete and enrich the data gathered previously from the desk research, the national report and the survey.

The number of participants for focus group activity in Italy was the following: a total of 9 participants, differently divided in groups and/or sub-groups depending on the activity in question. The composure of the focus group included 2 youth workers, 5 youth persons and 2 persons representative of companies/associations/entities active in the digital environment, i.e. employers.

The activities of the focus group were facilitated by two moderators. The ‘scene’ of the focus groups was a gathering of participants around a table to informally discuss and share ideas and opinions about the topic of the project: the moderators, two employees of the European Digital Learning Network, were responsible for moderating the discussion and leading the activities, animating the debate it through a set of questions after a short introduction and a brief presentation of the project.

The research finally started with the question: “what are your thoughts about the survey on digital skills and competencies (Digital Competence Framework targeted to the Digitalised Economy)?” The participants reacted promptly and a fruitful discussion begun. In the group all the participants were interested in the subject of the survey, recognising the importance of digital competencies and skills in the work sphere. In particular, the main observations emerged from the discussion were:

In continuity with the introductory questions, which warmed up the atmosphere and engaged the participants referring to the surveys’ results, the moderators led the way to a more focused, precise exchange of views, beliefs and opinions specifically on the 10 jobs list. To facilitate the debate, the group was divided in 3 smaller groups of 3 persons each and asked to comment the list. The main observations about it were:

Activity Three: The abilities/capabilities identified through the survey.

The moderator briefly resumed the points discussed along the whole activity and invited the participants, divided always in sub-groups of 3 persons each, to discuss and have their say about the specific competencies resulted from the analysis of the two questionnaires. Some mentioned comments and ideas were the following:

The identification of the most important advanced digital skills/competencies.

The end of the session was animated by a dynamic activity: keeping in mind the considerations of the group about the abilities emerged in the survey, the facilitators asked the participants to create groups according to their preferred advanced digital skill, where preferred meant the one seen and considered the most crucial for the future of the digital economy in Italy. The 9 participants quickly divided in sub-groups, whose structure is described above:

The four activities during the focus groups conducted among Italian youth workers, young people and employers in the digital environment on the topic of digital competencies and advanced skills in the framework of digitalised economy substantially confirmed the figures emerged from the analysis of the survey – the two questionnaires- previously done and provided new qualitative data for the project’s research.