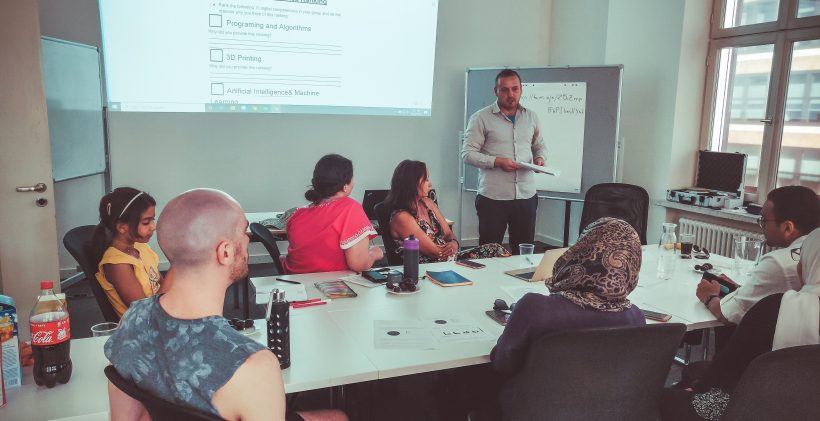 On August 31st, 2019 a German focus group was conducted at the Hertie School of Governance (Friedrichstrasse 180) in Berlin with 8 participants and 2 facilitators (Grigoriy Grigoriev & Haytham Mones). The composure of the group included 3 individuals that are working in the digital environment, 2 youth workers, and 3 youth persons.

Overall the goal of the focus group was to present the results of the survey (employer and yp/yw) with regards to digital competencies, their knowledge and identify possible venues for their improvement via certain methods & tools.

The format was structured and notes were hand recorded. Additionally, when working within activities, the groups/individuals classified and wrote out their input that is recorded and available to be further examined. With regards to the summary of the focus group, some more interesting thoughts and discussions are below, divided by individual activities.

Activity 1: Presentation of the employer survey and incomplete youth survey

Two groups of 4 were divided and discussed the identified 10 jobs and what they thought about them as well as ranked them accordingly to their ideas (scanned available and analysis further down below – TBI).

Some mentioned thoughts and discussion were:

Worked in the same groups of four but now to identify the importance of capabilities as were identified by the survey (most mentioned words).

Four competencies for the focus group were identified to use in the following activity. Some mentioned thoughts and discussion were:

Template of Teaching was presented and used to do in one group for 1 competency together to understand the format. Fourth most important competency was chosen ‘3D printing’ (see photographs). Three groups were created with individuals joining one they wanted to work on.

Three most important competencies as identified by the focus group were

To see the provided outcome see scanned copies of suggested methods, tools and topics to be covered.